Perhaps this day should be renamed Hallmark Day or Interflora Day.

Most of the red roses available in the UK for Valentine’s Day are exported from Kenya where 120 million cut rose stems are shipped, most of them destined for Britain.


Stoneballs Company could now fill its blog with information about roses but no, we have resisted that easy journal entry temptation.

If you don't want to spend vast sums on extravagantly arranged blousy red roses or the cheap garage forecourt flowers are already hanging their heads in shame on the front seat of your car, (turn the heater down) then read on.....


An alternative to show your love you have really put a great deal of thought in to a Valentine gift is an almond tree.

The name Valentine is associated with the Christian Saint named Valentinus who was a priest near Rome in 270 A.D. Valentinus was imprisoned for holding wedding ceremonies for soldiers who were forbidden to marry as they were considered to be better fighters if they were single.
Before being executed for his ‘crime’ he healed the daughter of his jailer, Julia who was blind and whom he had befriended.
On the eve of his death Valentinus wrote a last note to Julia, urging her to stay close to God. He signed it, "From your Valentine." His sentence was carried out the next day, February 14, 270 A.D.

It is said that Julia planted a pink-blossomed almond tree near his grave. The almond tree remains a symbol of abiding love and friendship.

Some facts to consider before the purchase of this truly romantic gift:

· Almond trees are in the same family as peaches and plums and the nuts grow as kernels within the fruit in the same wa
· Almonds can be grown from the nut (or seed) but it is more reliable to buy young tree, either bare root or pot grown, which will fruit in its second or third year
· Easy to grow but cropping will be light unless the right weather conditions prevail: warm, dry summers and frost-free winters
· Good drought resistance once established.
(with thanks to www.allotment.org.uk

Alternatively, a bag of almonds may be a compromise gift…..but perhaps that’s straying a tad far for some people …… healthy though. 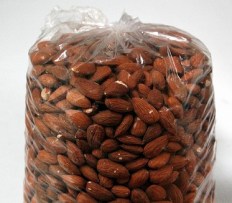 Disclaimer: Stoneballs Company Blog can be held in no way responsible if the gift of a bag of almonds is not received in a welcoming manner by the recipient.

Posted by Stoneballs Company at 07:51