Could this be the oldest recorded use of stone balls? Fascinating article on the National Geographic web site - click on the link. 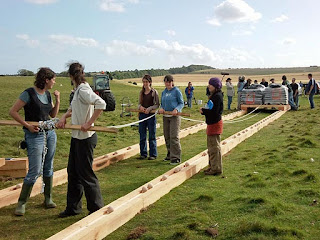 It's one of Stonehenge's greatest mysteries: How did Stone Age Britons move 45-ton slabs across dozens of miles to create the 4,500-year-old stone circle?
Now a new theory says that, while the ancient builders didn't have wheels, they may well have had balls.
A previous theory suggested that the builders used wooden rollers—carved tree trunks laid side by side on a constructed hard surface. Another imagined huge wooden sleds atop greased wooden rails.
But critics say the rollers' hard pathway would have left telltale gouges in the landscape, which have never been found. And the sled system, while plausible, would have required huge amounts of manpower—hundreds of men at a time to move one of the largest Stonehenge stones, according to a 1997 study.
Andrew Young, though, says Stonehenge's slabs, may have been rolled over a series of balls lined up in grooved rails, according to a November 30 statement from Exeter University in the U.Kwhere Young is a doctoral student in biosciences.'

Posted by Stoneballs Company at 06:57